I MARRIED A GENIUS

Chapter 4: The Wedding, House and At Homes 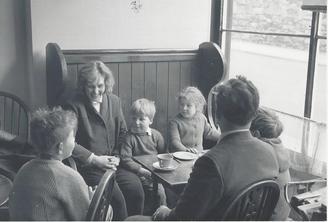 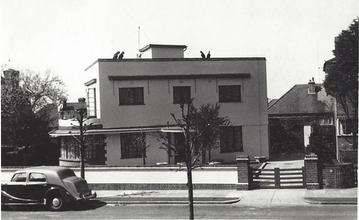 Shortly before gaining the P.H.D and after living together for eighteen months, we had the divorce come through and Hans finally made an honest woman of me. We got married at the Caxton Hall registry office because a white wedding was out of the question with a divorcee at that time. Nevertheless, it was a memorable event with my Mum and her friend Jan Sedivka as our witnesses and a fabulous breakfast afterwards which was laid on by my Mum. Both Hans and I were happy to have a very quiet modest wedding not least because none of us would have been able to afford a white wedding with all the expense, nor could we afford a honeymoon then although we much later combined it with a trip abroad at which Hans gave a lecture. The main thing was that we were married and everything was now official and above board and we were able to think of settling down and raising a family.

Three years later our son Gary was born at our home with a midwife in charge. This was great as I was not strapped to any hospital instruments and not hurried so we played cards and while in labour it was all so natural and not treated as an illness needing hospital care. Gary's Dad was out playing tennis and was delighted to hear that we had a healthy 7 pound son. Nowadays fathers are expected to be present at the birth but even now, in retrospect, I believe that the birth experience is “woman's work” and very private. Of course, a fair bit of preparation is necessary, such as appropriate exercises as those muscles needed to push out a baby are fairly unique. I was lucky enough to have a job where I could pop home for these exercises a light lunch and a brief rest. In sum, pregnancy and the births were when I felt best!

Having had experience with Michael, Hans was very clued up when there were queries and endlessly reassuring. It soon became obvious that Gary needed a garden and so we went house hunting on Sundays with the pram.

One day we met Dr. Handler who had delivered Gary and we told him we were looking for a house. He told us of one for sale in the road where he lived with a sad story attached to it. It seems a family had occupied two adjourning houses with the parents in one and the daughter, her husband and their son in the other. When recently the father had died his wife died of a broken heart three days later. This left the daughter with a choice as to which house to keep and which to sell. As the parents' house was bigger than hers and her brother had also lived with their parents she opted for the bigger house leaving her house for sale. As the sale had not been put on the market yet the Doctor suggested he would introduce us to the vendor and this he duly did. It was a memorable meeting with dainty smoked salmon sandwiches and a dream house! She remarked that as they were going to live next door they wanted pleasant people to buy the house and not anyone in a "greasy mackintosh", and fortunately we were quite respectably dressed!

We immediately fell in love with the house which, they told us, had been built by a builder for himself and this became obvious in due course as we were fortunate enough to buy that house though not without a minor hiccough. We needed a guarantor for the £250 pound deposit and Monte Shapiro was happy to oblige. His wife, however, disagreed and insisted that Monte withdraw the offer which he duly did informing our Bank of their decision. So we needed a different guarantor which we found in Asenath Petrie, who was a psychology colleague in our department. Thank goodness all went well after that and we moved in when Gary was two years old and have lived happily in this house ever since.

As our house was built by a builder for himself and as he was of a religious belief that did not approve of heating this was a feature sadly lacking as our previous owners found when they moved in. As they were of Italian origin they set about installing heating not only central heating in every room but additionally fireplaces, also in every room! While the former was a boon, and still exists here, we wanted to get rid of the fireplaces. That is when I learned a valuable lesson. As D.I.Y. enthusiast Hans was not inclined but, possibly to impress me, he armed himself with a little penknife and tried to remove one of the fireplaces. Next to no time the knife slipped and we found ourselves in A and E at the local hospital! From then on it was accepted that Hans would not be expected to do household repairs but he opined that he would always make the money to pay someone else to do them. This he always did so an amicable agreement was reached. In the event, as far as the fireplaces were concerned, some lucky builders removed them all, charged us and made off with valuable marble fireplaces no doubt making themselves a huge profit! At that time we knew no better but we did learn from the experience.

We then had a series of au pairs as I went back to work six weeks after Gary was born, which was all the maternity leave granted to us at the time. They came from Denmark and recommended their friends when they left which was a great arrangement for us as it gave us continuity and lovely helpful girls.

At that time we instigated our At Homes which happened every other Thursday, to which our students and staff were invited if they wanted to discuss a work problem. It was an open invitation so we never knew who, or how many, would come. The au pair would prepare a smorgasbord and coffee and these occasions became known as very successful. Next morning at work, though, some complained that because of the coffee they had difficulty sleeping but we think it was more likely the conversation that was ever so stimulating that kept their brains awake. Anyhow they were very enjoyable occasions and in addition I recall many At Homes when I nursed one or other of our babies in a strong left arm.

One of the more entertaining at Homes was provided by one of our students who specialised in sexual disorders. She had spoken to a very senior member of the physiology department who opined that her methods would not "turn him on". This she disagreed with and they consequently decided to experiment the matter. Every morning for a while she and he met and used her method taking records of his and her orgasms in response. Then they would come down to the canteen for lunch as if nothing had happened. Anyhow these records were displayed at one of our At Homes making for an unusually lively evening with the records laid out on the floor and our student pointing out where each orgasm occurred. Suffice it to say that this particular student became a renowned sex therapist and immensely popular with all the men if she attended a party!

These occasions were nearly always attended by Irene Martin a psychology colleague in our department who became my very best friend. She was initially on our clinical course, which by then had been launched with Monte Shapiro as the head, and she then registered for a Ph.D. This was unusual as the trend was to do the Ph.D. first and then apply for a place on the clinical course. As the first clinical course in this country it was very sought after and the qualifications were very stringent such as a first class degree etc. Anyhow, I first met Irene when she came to my office for advice as she was expecting her first baby and our Gary was well established by then. We became very close families and by the time we had increased ours by having Connie and soon after Kevin and Irene had got Nick, Jon and Cathy we socialised with each other regularly. We alternated Sundays for tea at each of our houses vying to produce the best cakes! When the school holidays came we arranged for a teacher to take the children, again alternating at each of our houses, and they all had a ball with Miss Dawson, a teacher, while Irene and I went to work without worry.

While we were such close friends Irene and I visited the Isle of Wight with a view to booking a joint holiday house for both of our families. We were met off the ferry by the Estate Agent with whom we had arranged the visit and he showed us a lovely flat overlooking the sea which we duly booked. However an unexpected event occurred which forced a change in our plan and the next chapter will explain more.